RETURNING A CLASSIC TO EDEN PARK

Cincinnati Parks Foundation is proud to partner with Cincinnati’s Order of the Sons and Daughters of Italy to bring the Capitoline Wolf statue and educational signage back to Twin Lakes at Eden Park, where it has stood for nearly 100 years.

In 1929, the Order of the Sons of Italy, Cincinnatus Lodge #1191 began planning for the 1931 Bicentennial Ohio State Convention in Cincinnati. During planning, the Convention Committee learned that the city of Rome, Georgia had recently received a replica statue of the famed Capitoline Wolf sculpture, “Lupa Romana.”

Inspired, they requested that a replica statue be gifted to the Queen City. The statue depicts the story of Romulus and Remus, the mythical founders of ancient Rome. The statue was gifted by the people of Rome, Italy, to Cincinnati in commemoration of the Roman patrician and leader Cincinnatus, for whom Cincinnati is named.

In 1932, the statue was replaced with a larger one, which stood in the Twin Lakes area of Eden Park for 90 years.

On June 17, 2022, the statue was reported missing—the wolf had been sawed off at its paws. Cincinnati Police believed the statue was stolen for scrap.

Immediately, Cincinnati’s Italian American community rallied to team with Cincinnati Parks and the Cincinnati Parks Foundation to replace the stolen she-wolf with another statue, cast from the original mold in Florence, Italy. The Sons & Daughters of Italy, including many descendants of the statue's original donors, spread the word and held a ravioli dinner as a fundraiser. Their efforts, combined with a donation from an anonymous donor completed the campaign.

In addition to replacing the stolen statue, this project will include new educational signage to be incorporated into the surrounding landscape.

To read more about this project, click here and  here.

Thank you to everyone in our community who worked with us to restore the Capitoline Wolf to Eden Park. 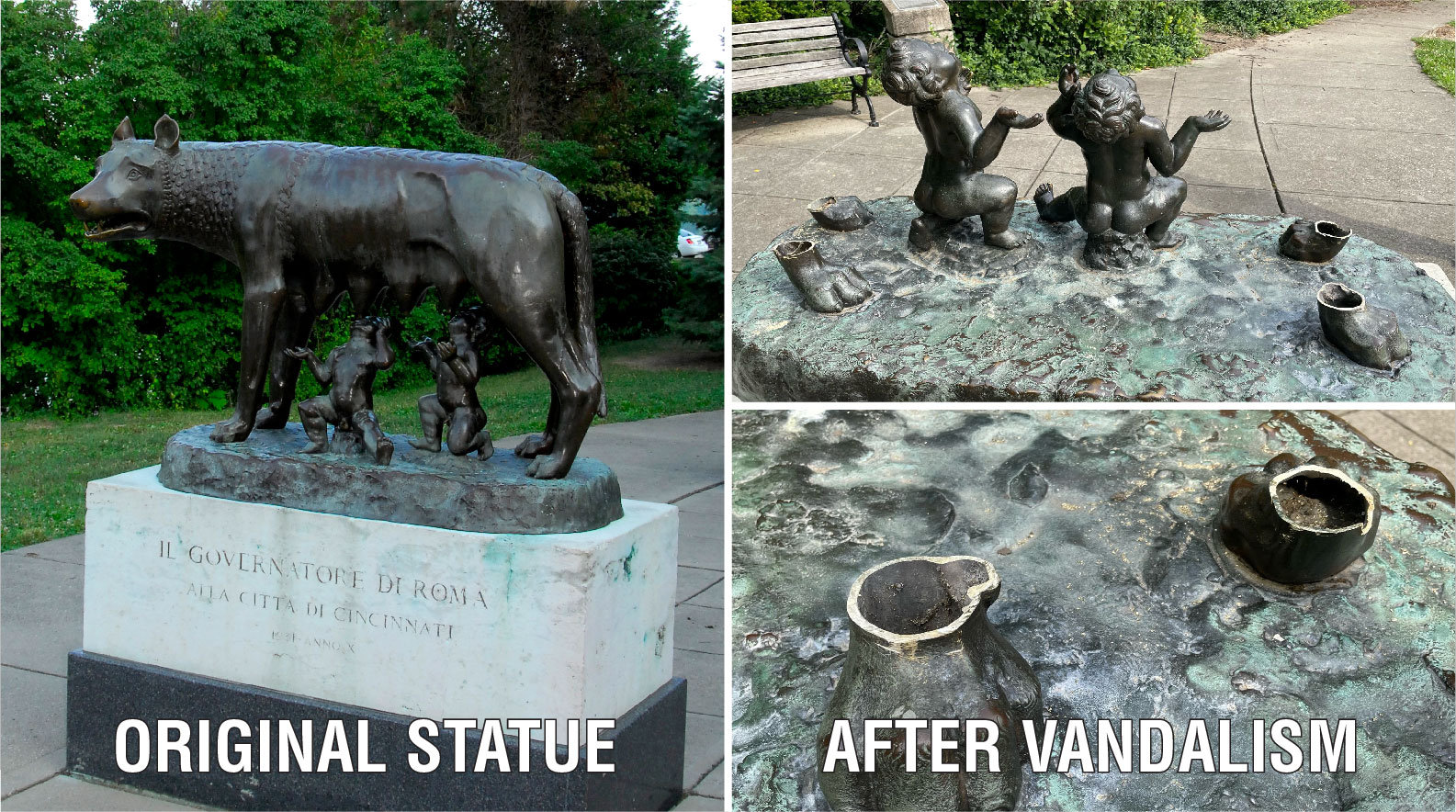 The Twin Lakes in Eden Park—just up the hill from the Krohn Conservatory, and across Eden Park Drive from the historic 172-foot-tall Water Tower—were once an old quarry. The quarry was converted into the two small lakes, joined by a footbridge, and surrounded by walking paths. The site enjoys an impressive view of the Ohio River Valley, a playground, and additional sculptures, such as the cormorant fisher, a gift from Cincinnati’s Japanese sister city, Gifu.

Cincinnati Parks are home to over 90 pieces of public art. This public collection ranges from statues of historical figures, to figures of abstract shape and texture. Regardless of the artistic school from which each sculpture originates, every piece within the system tells a story.